An interesting case of a zirconia crown-post-core combination completed overseas.  The margins were failing on the coronal aspect with recurrent caries noted radiographically, however the core was radiographically “intact.”  The difficulty was the hair-pulling required during the preparation separating the “crown” from the “post-core” segment of zirconia.  Once this was completed,  the margins of the zirconia post/core could now be sealed using the APC approach (sacrifice the use of CHX for a MDP-containing silane primer) before a 10-MDP containing bond is used.  This will create an “immediate dentin seal” and a surface that can be “reactivated” by micro air abrasion next visit.  It will be critical not to touch the zirconia with phosphoric etch on the cementation appointment, and hence a very conservative selective etch will be used only on the outermost enamel rim before a self-etching MDP primer and bond are used on the remainder of the preparation. 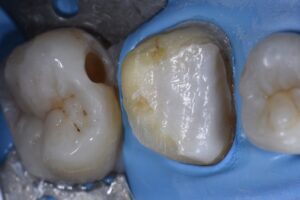 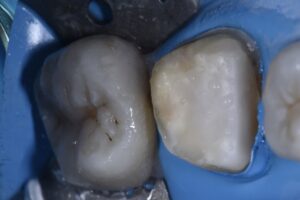